OTTAWA -- The federal government is backing off a plan to give bureaucrats more time to respond to veterans seeking benefits and support for their service-related injuries. 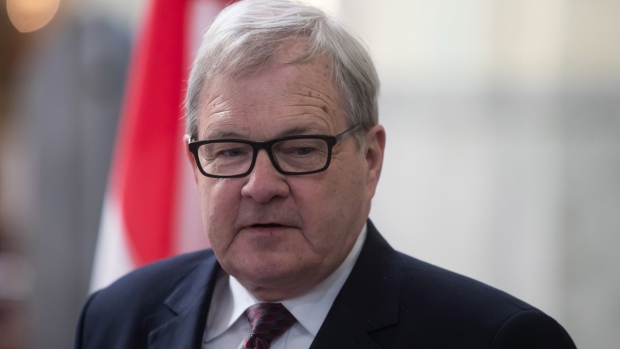 Minister of Veterans Affairs Lawrence MacAuley attends a departure ceremony for a pair of combat boots that will travel to Halifax on a VIA Rail train, at Pacific Central Station in Vancouver, on Friday March 29, 2019. THE CANADIAN PRESS/Darryl Dyck

The idea was floated last fall, when Veterans Affairs Canada said it wanted to give veterans a more "realistic" idea of when they could expect to hear back about their requests for assistance.

That followed years of criticism about former service members' being forced to wait months longer than promised to get support -- or even find out whether they qualified for help.

But Veterans Affairs Minister Lawrence MacAulay's spokesman Alex Wellstead says the idea was scrapped following consultations with hundreds of veterans and their families.

Wellstead says the government remains committed instead to getting benefits and services to veterans faster and more efficiently.

Veterans Affairs' backlog of applications for disability benefits was nearly 40,000 at the end of November -- an increase of 11,000 from the same month in 2017.