Communities across Ontario watching for or actively grappling with flood conditions reported cautious progress on Tuesday even as they braced for a fresh wave of precipitation this week.

Michelle McQuigge, The Canadian Press
Published Wednesday, May 1, 2019 6:42AM EDT 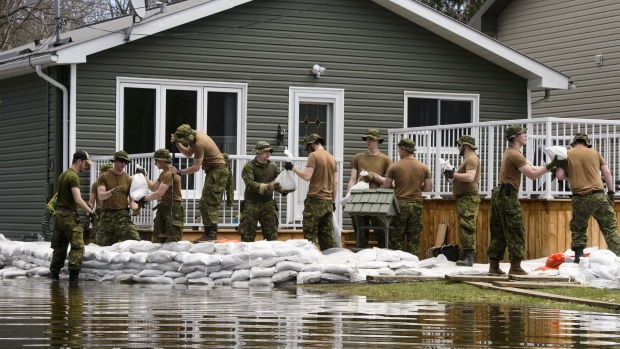 Soldiers work to hold back floodwaters on the Ottawa River in Cumberland, Ont., on Tuesday, April 30, 2019. THE CANADIAN PRESS/Sean Kilpatrick

Weather advisories stretching from Leamington to Ottawa forecast a mix of ice, snow and rain for Wednesday, which local officials warned would likely further swell local waterways that have been breaching their banks for the past week.

A brief lull provided by Mother Nature, however, allowed water levels to subside slightly in several of the hardest-hit communities, providing a slight buffer ahead of the fresh rainfall.

In Bracebridge, Ont., one of four cottage-country communities to declare states of emergency in light of local flood conditions, Mayor Graydon Smith said levels in the Muskoka River and Lake Muskoka have either crested or have begun to recede.

But he said Environment Canada's latest forecast, calling for between 20 and 35 millimetres of rain to fall on the central Ontario region, promises to put further strain on already heavily taxed resources.

"It takes some time for the watershed to react," he said at a news conference. "There's a little bit of capacity now for new water introduced to it ... but what (the rain) does do again is delay the extent of recovery. So we're hoping that we don't see as much rain as is forecast."

Officials in the Ontario communities of Huntsville, Muskoka Lakes Township and Minden Hills, all dotted around a part of the province popular with cottagers, also reported that local lakes and river levels had either receded or largely stabilized. But all three joined Bracebridge in maintaining the states of emergency declared last week as spring runoff and heavy rains pushed water levels to historic highs.

Smith said the Canadian Armed Forces will continue ramping up its presence in the area, saying 160 soldiers were on the ground as of Tuesday to assist with distributing sandbags and providing other flood relief.

For the second day in a row, Muskoka Lakes Township called on local volunteers to help fill sandbags in a bid to shore up the local supply.

In eastern Ontario, where residents in and around Ottawa area were also dealing with flood conditions, the provincial government said it was activating disaster recovery assistance for both Renfrew County and the city of Pembroke, Ont.

"I want to let those individuals who have been affected by the flooding across Eastern Ontario know that we stand with them through this recovery," Municipal Affairs Minister Steve Clark said in a statement. "It pains me to see the damage caused to people's homes and businesses.,"

At the opposite end of the province, the Essex Region Conservation Authority issued a flood warning for part of the municipality of Leamington along with flood watches for residents living along the Lake Erie, Lake St. Clair and Detroit River shorelines.

The authority said Environment Canada is calling for as much as 20 millimetres of rain to fall on Tuesday night and into Wednesday morning. Higher winds during the same period have potential to boost water levels and cause possible flooding or erosion in those areas, it added.

"This additional rainfall on wet ground conditions is likely to cause higher than normal runoff volumes causing ponding/standing water conditions and will exacerbate areas that were previously flooded," it said in a statement.